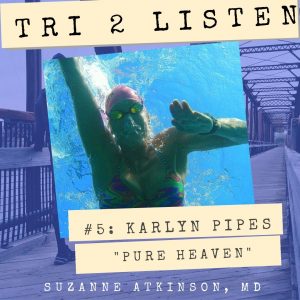 Today’s podcast is from our “lost file”.   Suzanne sat down with Karlyn Pipes before the 2014 Ironman World Championships.  The two of them discussed the Island’s natural & spiritual history, the waters around Kona, and swimming.

Karlyn dives into many of her swimming techniques, her attitude towards training & racing, and discusses several different strategies that triathletes can use to start making changes to their swim style and exploring things that may work for them.

Listen in as two coaches discuss their favorite sport with each other.  You’re guaranteed to come away a better swimmer!

Camps
Aloha Swim Camps
“I have had a dream of offering some camp since I moved here in 2004. This year that dream became a reality and I offered one in January and one in February. We had mostly women, many of them in recovery interestingly enough, and we had an amazing time.” – Karlyn

Books
The Do Over

In 2014, I was on the island and spotted an amazing swim coach giving mini-lessons out of the demonstration Endless Pool on the main drag, across from the pier.  It was none other than Karlyn!  Eager to get into the pool and learn from her, I quickly changed into my suit and waited for my turn.  After a great lesson where she both confirmed what I was doing well and gave me some new things to experiment with, I dried off, introduced myself formally, and asked her for an interview.

She obliged, we snuck off to a grassy nook by the hotel and not only had a wonderful interview, but we also struck off an enjoyable friendship.

At the age of 53, Karlyn was to be inducted into the International Swimming Hall of Fame (ISHOF) joining all-time swimming greats such as Janet Evans, Mark Spitz, and Johnny Weissmuller to name a few. Competition is stiff to be considered, let alone inducted, and since its inception back in 1965 only 14 “Masters” swimmers have been honored.

While an amazing accomplishment in itself, what is even more amazing is the circuitous, near-death journey she took to get there.

Along the way, Karlyn has overcome addiction, set over 300 Masters World Records, over 200 FINA World records, coached thousands of athletes, traveled the globe teaching swimming, and made her home in Kailua-Kona on the Big Island of Hawaii. 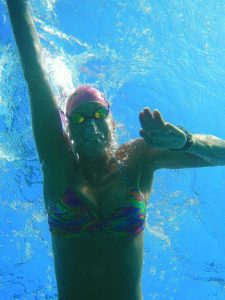 Karlyn shows off her excellent high elbow catch and forearm press all while talking to the fishies. 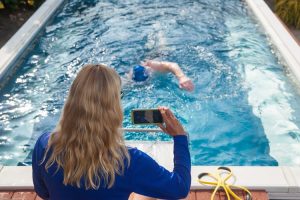 Karlyn teaching in her endless pool in Kona, Hawaii

Karlyn Pipes is all smiles as she exits the swim leg of a triathlon. 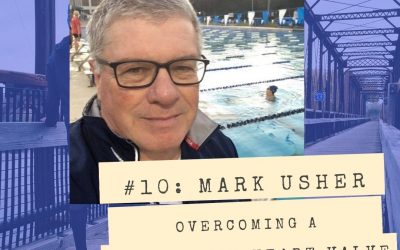